Friday, 10th January: The winners of the 56th BT Young Scientist & Technology Exhibition (BTYSTE) have been announced. Cormac Harris and Alan O’Sullivan, both aged 16, fourth year students from Coláiste Choilm, Cork, have taken home the top prize for a project entitled “A statistical investigation into the prevalence of gender stereotyping in 5-7 year olds and the development of an initiative to combat gender bias”. The coveted prize was presented to the winners this evening in the BT Arena by Minister for Education and Skills, Joe McHugh TD, and Managing Director of BT Ireland, Shay Walsh. Cormac and Alan presented their project in the Intermediate section in the Social and Behavioural Sciences category.

Head Judge of the Social and Behavioural Sciences Group category, Professor Joe Barry said about Cormac and Alan’s project, ‘Despite awareness of the lower percentage of females relative to males pursuing study and careers in science, technology, engineering and mathematics (STEM), we still do not understand exactly why this is the case. The aim of Cormac and Alan’s project was to determine how early gender stereotyping can be identified. They conducted workshops with 376 5-7 year olds from a range of school settings with a number of different tasks including: choosing between gender-specific and gender-neutral toys; drawing and naming an engineer, and; rating male and female competency at a number of gender-specific roles. One of the most striking findings emerging from the research was that 96% of boys drew a male engineer while just over 50% of girls drew a female engineer. This, along with the other data, indicates that gender stereotypes emerge in young children and that they are particularly strong among boys. Cormac and Alan’s findings are important as intervention typically focusses on girls, but the project recognises the need to focus on all children, boys and girls, from a young age, in order to combat the development of gender stereotyping. The project is particularly impressive in that Cormac and Alan also created very pertinent and useable resources for primary school teachers to combat gender stereotyping among young children.’

The 2020 BT Young Scientist & Technology winners received the BTYSTE perpetual trophy and the top prize of €7,500. The lucky winners will also represent Ireland at the European Union Contest for Young Scientists, which takes place in Salamanca, Spain in September 2020. Cormac and Alan will also get to attend the 62nd Annual London International Youth Science Forum later in the year.

Minister for Education and Skills, Joe McHugh TD, said, “Congratulations to all the students at this year’s BT Young Scientist & Technology Exhibition and in particular to Cormac and Alan on their fantastic project, well-deserved winners. The atmosphere of excitement, creativity and fun at the RDS this week has been incredible. I am particularly pleased to see so many young people tackling some of the most important issues facing us, from climate change to health, to technology, ethics and societal change. The students are a credit to their families, schools and teachers and they should rightly be proud of being here. They are a huge inspiration.

“I’d like to thank everyone involved in the unique and brilliant event that the BTYSTE is; the organisers; the 83 judges; the dedicated teachers; and of course, the mothers, fathers and families whose support is absolutely key to this.”

Shay Walsh, Managing Director, BT Ireland said, “Congratulations to all of our participants, and particularly to all our winners. For more than five decades, the Exhibition has shown the ingenuity of Ireland’s youth, and this year’s Exhibition is no exception. The students at the BT Young Scientist & Technology Exhibition have sought creative and innovative solutions to some of the world’s most pressing issues, and that spirit and drive is to be commended. We say “Create Today, Shape Tomorrow” at the exhibition and it really is only the beginning. From the young students involved in The Primary Science Fair to secondary students at the BT Young Scientist & Technology Exhibition, it is vitally important that every student’s voyage of discovery does not end here.”

The award for Individual winner went to Oscar Despard, aged 17, a fifth year student from Sandford Park, Dublin, for his project entitled “Applying Data-Driven Experimental Analysis to the Irish Longitudinal Study on Aging”. The student was in the Biological and Ecological Sciences Category at Senior level.

Oscar’s project used data from a large database of Irish individuals to analyse a number of blood proteins to see if there was a correlation between blood levels and atrial fibrillation (AF). Levels of a protein called LDL showed an unexpected relationship with AF. The research, somewhat unexpectedly, suggested a possible beneficial effect of LDL in reducing the risk of AF. The work went on to show that a protein in white blood cells in the heart played a pivotal role in the process. This exceptional young researcher took a new perspective on a global problem and has brought new insights.

The Group runners-up award was presented to Cathal O’Mara and James O’Malley, both aged 13, first year students at Castletroy College, Limerick for their project entitled ‘Bin Buddy – A SMART Sorting Bin‘. The students were in the Technology category at Junior level.

These talented young students took a significant and important social problem, which is the sorting of waste in a domestic setting and delivered a fully functioning, integrated technological solution at a level beyond their years. The project, which sorts waste into their correct bins through a sophisticated image recognition system, has the potential for accurate waste segregation in a domestic setting. The judges see potential commercial application, as it fixes a significant challenge of incorrect waste segregation and attempts to solve a huge environmental issue today.

The Individual runner-up award was presented to Ava Hynes, aged 14, a second-year student at Coláiste Treasa, Cork for her project entitled ‘A statistical analysis of the impact of adolescent smartphone use on adolescent social anxiety and social isolation’ in the Social and Behavioural Sciences category at Junior level.

Ava’s project was directly relevant to the lived experience of young people in Ireland and showcased extensive research and impressive methodology utilising internationally standardised scales. The project collected data from 792 12-19-year-old post primary students looking at levels of social anxiety, social phobia and adolescent loneliness, in addition to smartphone usage. Adolescent social phobia levels as well as social isolation were found to be affected by smartphone usage and 14.6% of the sample were found to have problematic smartphone usage levels. The research looked at factors such as age, gender, room of phone usage (such as bedroom etc), number of pickups of the phone, and how these factors related to social phobia and loneliness. Recommendations for parents, governments, technology companies, medical professionals and adolescents themselves are also discussed in the research.

The BT Young Scientist & Technology Exhibition and the Primary Science Fair continues tomorrow, Saturday 11th January, and is open to the public from 09:30 a.m. – 17:30 p.m. Make sure to book your tickets online in advance at www.btyoungscientist.com/ticketing to avoid disappointment as tickets have proven once again to be in high demand this year. Visitors can look forward to a packed event once again tomorrow with 20 shows scheduled to thrill all audiences.

Follow #BTYSTE and #CreateTodayShapeTomorrow to be part of the action!

The BT Young Scientist & Technology Exhibition is much more than a competition – it is the experience of a lifetime for the students and teachers who take part. Designed to raise schools’ engagement in the critical subjects of science, technology, engineering and maths (STEM), the Exhibition calls upon students aged 12-19 years from all over the island of Ireland to showcase innovative science and technology projects to approx. 50,000 visitors each year. The BT Young Scientist & Technology Exhibition is supported by several valued partners including the Department of Education & Skills, Analog Devices, CISC, Perrigo, RTE and the Department of Education, Northern Ireland. Learn more at www.btyoungscientist.com.

About The Primary Science Fair:

The Primary Science Fair, founded in 2003, will take place at the BT Young Scientist & Technology Exhibition from the 9th-11th January 2020. Bringing together inquiring minds from primary schools across the country, The Primary Science Fair will give young students the chance to discover and learn about the possibilities of science, technology, engineering and maths by working on their own projects in a non-competitive environment. The Primary Science Fair supports the curriculum and gives these students a platform to learn more about the scientific method and showcase their hard work on a national stage. The aim of the event is to foster a love of science early, and help students develop their math and science skills.

BT’s purpose is to use the power of communications to make a better world. It is one of the world’s leading providers of communications services and solutions, serving customers in 180 countries. Its principal activities include the provision of networked IT services globally; local, national and international telecommunications services to its customers for use at home, at work and on the move; broadband, TV and internet products and services; and converged fixed-mobile products and services.  BT consists of four customer-facing units: Consumer, Enterprise, Global and Openreach.

British Telecommunications plc (BT) is a fully owned subsidiary of BT Group plc and encompasses virtually all businesses and assets of the BT Group. BT Group plc is listed on the London stock exchange.

Thrilling line up of Science, Technology and Inspiration unveiled for the first ever virtual BT Young Scientist & Technology Exhibition – and it’s all free! 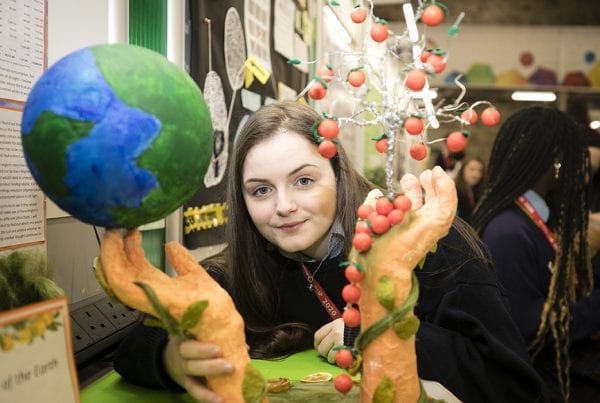 Awards that can be won
2022 Award Winners