Dublin, Thursday 27th December 2012: Fancy seeing Dr. Who’s Dalek and Star Wars R2D2 go head to head in a battle of the robots?  Or learn about the journey your food takes from mouth to guts? Or how about coming face to face with an 8ft tall Titan the Robot?

Interested? Then the BT Young Scientist & Technology Exhibition 2013 is where you should be this January. Open to the public from Thursday, 10th – Saturday, 12th January you will also find 550 projects competing for the coveted title of BT Young Scientist & Technologist of the Year 2013. These projects have been developed by secondary school students from around the country and include some seriously weird and wacky inventions, ideas and creations.

In addition to the competition, shows include The World of Robots which brings together the best 100kilo combat robots that are better armed than a Special Forces unit. Dr. Who’s Dalek, Star Wars R2D2, Thor and World Champion Storm II are just some of the robots that will fight it out with spinning discs, razor sharp teeth, brute strength and no mercy, all inside a bullet proof cage. Returning due to popular demand for his third appearance the 8ft tall giant, Titan the Robot will shock audiences as he ‘fires up’ and comes to life.

And there is It Takes Guts which brings us on the journey of our food into our mouth, through the acid bath in the stomach, along metres of pulsating guts, and… out the other end!  Presented by London’s The Science Museum, which is part funded by BT, the show promises to be a gross, squirm-inducing demonstration!  And Sci-Five, W5’s Astonishing Experiments team make their way through some excellent experiments with flashes, bangs and some elephant’s toothpaste!

All shows have scheduled times each day the exhibition is open to the public including Thursday 10th – Saturday 12th January with large capacity venues throughout the RDS. 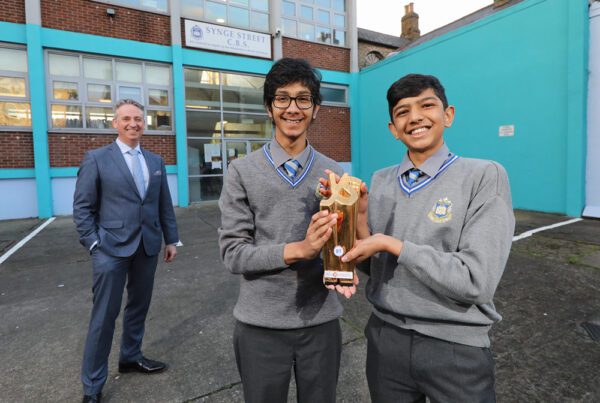 Awards that can be won
2023 Award Winners